A rally took place yesterday afternoon, gathering thousands of people on Peace Avenue, in the city centre of UB. 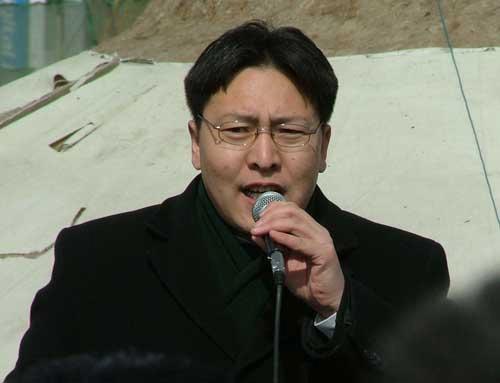 A rally took place yesterday afternoon, gathering thousands of people on Peace Avenue, in the city centre of UB.

The rally was organized and led by O. Magnai and J. Batzandan, respectively leader and board member of the Civil Movement party (CM), a political party created in 2005.

In addition to the members and supporters of the CM present, many students took part to the march.

This was the first rally to be organized in UB for the last year and 7 months. Th elast rally to take place in UB was July 1st when thousands of people gathered in Sukhbaatar square to demonstrate against the 2008 election results.

The rally was organized in support of the CM letter destined for the Government in which the CM makes three main requests.

Secondly, the Party also calls for changes to be performed to the Oyu Tolgoi project agreement signed by ex-Prime and now leader of the Evolutionary Party Minister Bayar. The CM estimates the 34%-66% agreement signed between Mongolia and Ivanhoe/Rio Tinto is unfair to the Mongolian side and wants the agreement to be rectified. They hold S.Bayar responsible and wish him to be investigated.

The Government has until the 1st of April to cancel or bring changes to the agreement if it wishes to do so.

Third, the CM demands that changes be brought to the constitution so members of the Parliament lose their parliamentary immunity and be investigated and charged like common citizens accordingly.

In addition, the letter stipulated the establishment of the United Association of the Civil Movements as of yesterday, Thursday 11, 2010 - there are currently hundreds of small civil movement associations in Mongolia – adding it was just the beginning of a process destined to last.

The letter will be given to Head of Parliament D. Demberel and Prime Minister S. Batbold.