HOW STALIN HELPED MONGOLIA WITH THE JAPANESE WAR PRISONERS

Stalin ordered 20 thousand prisoners to be sent to the Mongolian People's Republic to use their labor for the needs of the national economy. In fact, by the end of 1945, the Mongolian People's Republic had taken 12,318 prisoners. The Allies were given to understand that in accordance with the Soviet-Mongolian Mutual Assistance Treaty of 1936, the parties must share joint military trophies. The Mongols accepted this as compensation for the Japanese invasion of Khalkhin Gol in 1939.

WITH THE JAPANESE WAR PRISONERS

At the end of World War II, the allies were negotiating among themselves on the division of Japan into occupation zones after the victory over it. According to their plans, the island of Hokkaido and the northwestern part of the island of Honshu were to be taken over by the Soviet Union, and the city of Tokyo was to be divided into four zones of occupation. But the directive SWNCC 705, signed by US President G. Trumen on August 16, 1945, canceled these plans. This document established that Japan would not be divided into occupation zones as Germany, but would be under the united control of the United States. 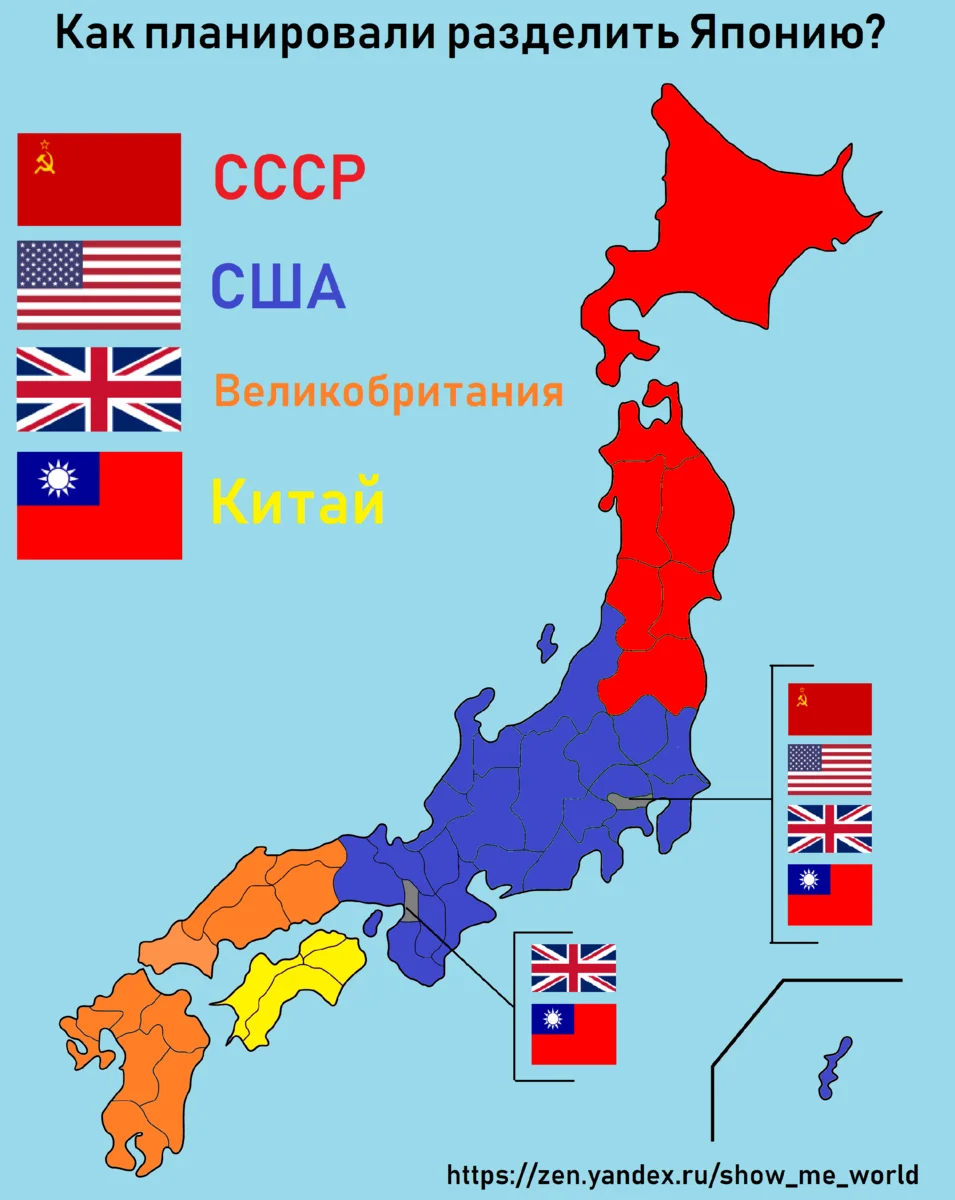 How did plan to divide Japan?

Stalin, who did not know about this directive, on the same day gave an order to Marshal Vasilievsky, commander-in-chief of the Soviet troops in the Far East, to land an assault force on the island of Hokkaido. But the landing, of course, did not take place. An order was also given not to send Japanese and Manchu prisoners of war to the USSR, but to place them in specially created camps and provide them with food according to the norms of the Japanese army.[1] Then they intended to send them to their homeland, as the Potsdam Declaration, signed by the heads of government of the United States, the Republic of China and Great Britain and published on July 26, 1945, stated that "the Japanese armed forces, after they are disarmed, will be allowed to return to their homelands with the opportunity to lead a peaceful working life."

But this did not happen. Stalin, having learned that he had been deceived, issued a secret order No. 9898 on August 23, according to which all Japanese prisoners of war were taken to the USSR for forced labor. It is also believed that Stalin wanted "to the fullest" to settle accounts with Japan. On September 3, 1945, the central newspapers of the Soviet Union published the “Appeal of Comrade. IV Stalin to the people ”It was written in it that “... we have our own special account to Japan”, “Our people believed and waited that the day would come when Japan would be defeated ...”, “We, people of the old generation, have been waiting for forty years, this day”, referring to the defeat of tsarist Russia by Japan in the war of 1904-1905.[2] 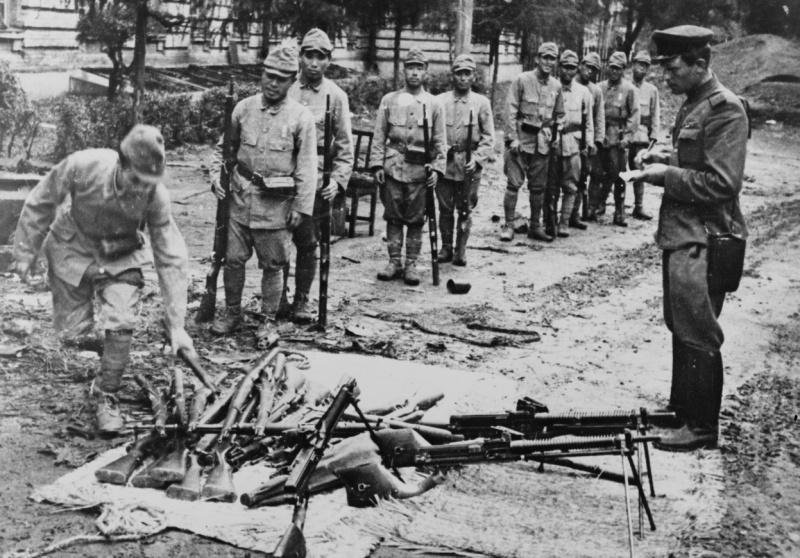 Only in the Trans-Baikal Front, 225371 soldiers were captured, of which 65 were Russians, 3862 Mongols, 3004 Koreans and 8956 Chinese. Among the Japanese there were 77 generals, 91 colonels, and among the Mongols, there were 1 colonel, 1 lieutenant colonel and 3 major.[3] In total, 609,158 prisoners were taken to the USSR, who were distributed to the Khabarovsk, Krasnoyarsk and Altai Territories, the Chita and Irkutsk Regions, the Buryat-Mongolian Autonomous Republic, as well as to Kazakhstan and Uzbekistan. Most of the prisoners were not regular soldiers, but civilians mobilized for military service living in Manchuria.[4]

Stalin ordered 20 thousand prisoners to be sent to the Mongolian People's Republic to use their labor for the needs of the national economy. In fact, by the end of 1945, the Mongolian People's Republic had taken 12,318 prisoners.[5] The Allies were given to understand that in accordance with the Soviet-Mongolian Mutual Assistance Treaty of 1936, the parties must share joint military trophies. The Mongols accepted this as compensation for the Japanese invasion of Khalkhin Gol in 1939.

Marshal H. Choibalsan, who headed the Government of the MPR, appealed to the Soviet side with a request to provide 80 trucks with the expectation of allocating 4 vehicles for the transport of each battalion of prisoners of 1000 people. Apparently the cars were never provided, tk. the prisoners walked 150 kilometers from the city of Jehe (today`s Chengde) to the city of Mugden (today`s Shenyang).[6] The prisoners were escorted by 500 Mongolian soldiers under the command of Colonel Ts. Samdangeleg. They appointed him because he knew Russian well, because graduated from the military school and the Frunze Academy in the Soviet Union, and the prisoners had to be transported across the territory of the USSR. From Mugden they were transported by rail to Naushki station where they were transferred to the Mongolian side. In total, 12,318 prisoners were transferred, and not 20 thousand, as indicated in Stalin's order. Moreover, they were transferred even without a list of names and surnames.

Many of them were not actually military, but civilians mobilized at the end of the war. Although the issue of the release of innocent civilians has been repeatedly raised, no one has seriously considered this issue.

Among the prisoners who arrived in Mongolia were two women, whom no one paid attention to when escorting the prisoners, but they were found only during a medical examination after their arrival in Mongolia. They wanted to be with their husbands. To avoid being recognized, the women shaved their heads. 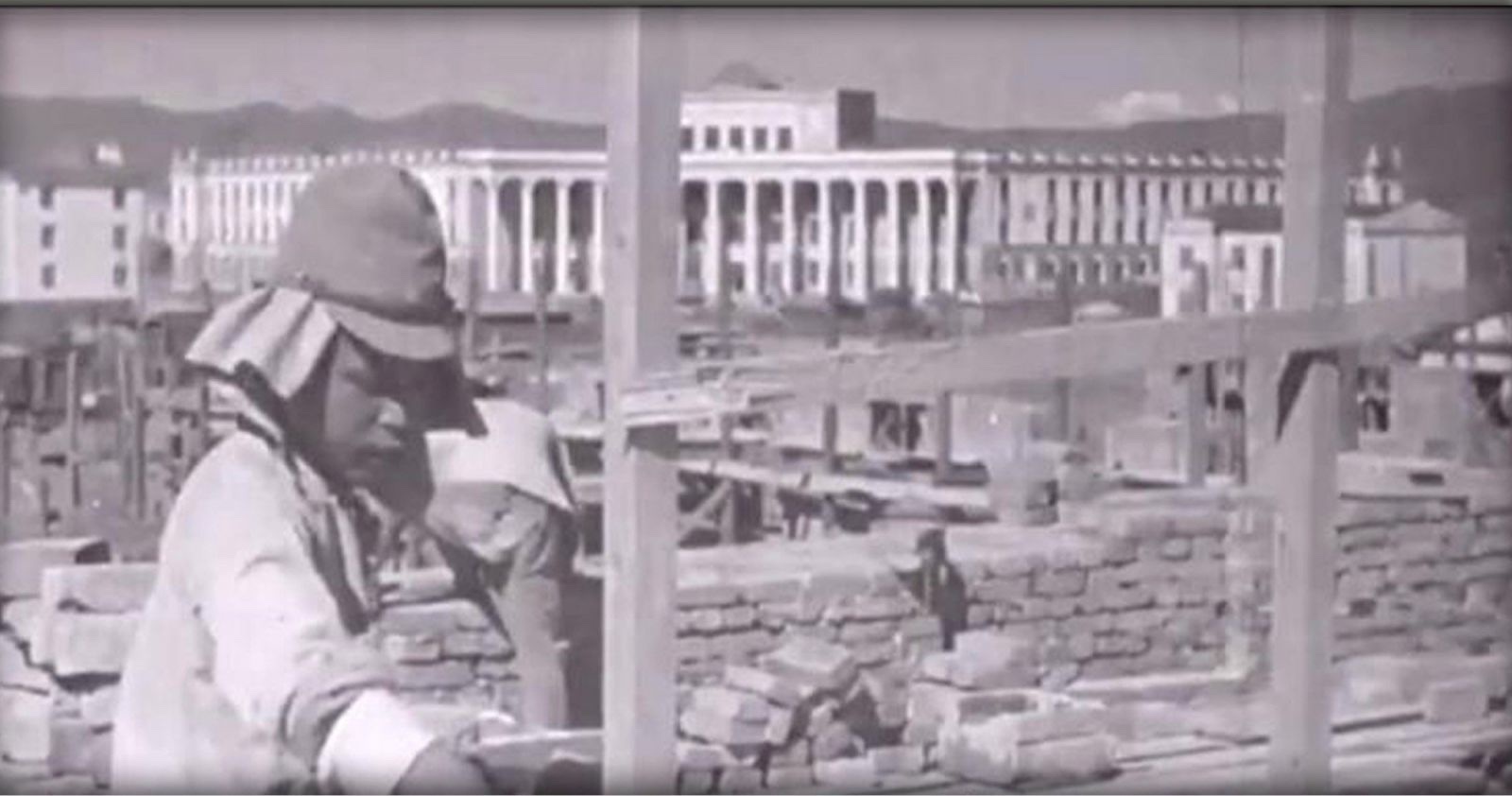 Japanese prisoners of war at construction work in Ulan Bator.

To manage the issues of arrangement, everyday life and the use of labor of prisoners, the Government of the Mongolian People's Republic created the Main Directorate for Japanese Prisoners of War. The bulk of the prisoners worked in the city of Ulan Bator on the construction of such facilities as the Government House, the building of the Mongolian State University, the Opera House, a cinema near the central square, the State Central Library, some residential buildings, etc. Aiso prisoners worked in a coal mine Nalaikh and objects of the national economy in the Selenga aimag. A certain number of prisoners were sent to fish on lakes and to engage in agriculture and horticulture, i.e. for the preparation of the food they need themselves.[7]

In the then post-war Mongolia, it was difficult to supply such a number of prisoners with everything necessary, there was a very low level of health care, there were almost no food products familiar to the prisoners. In addition, the climate was not familiar to them. It was especially difficult in the winter of 1945-1946, because there were no heated living quarters to accommodate the prisoners. Due to these factors, after 2 years, i.e. by October 1947, when they were sent home, more than 1,600 people were missing who were buried in Mongolia.[8] The archival materials record that 1615 people died due to illness, disappeared, froze, drowned and executed. Of these, 51 people died of typhus, but as a result of the operational measures taken, the outbreak of typhus did not spread. 55 people died due to accidents at work.[9]

In 1991, Japan turned to the Mongolian side with a request to allow them to take the bodies of the buried, and in 1994 they took them away, having been cremated in advance according to their customs. Near Ulan Bator, on the site of the most numerous burials, the Japanese side at their own expense then built a memorial complex, which is constantly visited not only by ordinary Japanese, but also by representatives of the authorities. For example, the Prime Ministers of Japan Kaifu, Koizumi, Abe visited there when they came to Mongolia on an official visit. 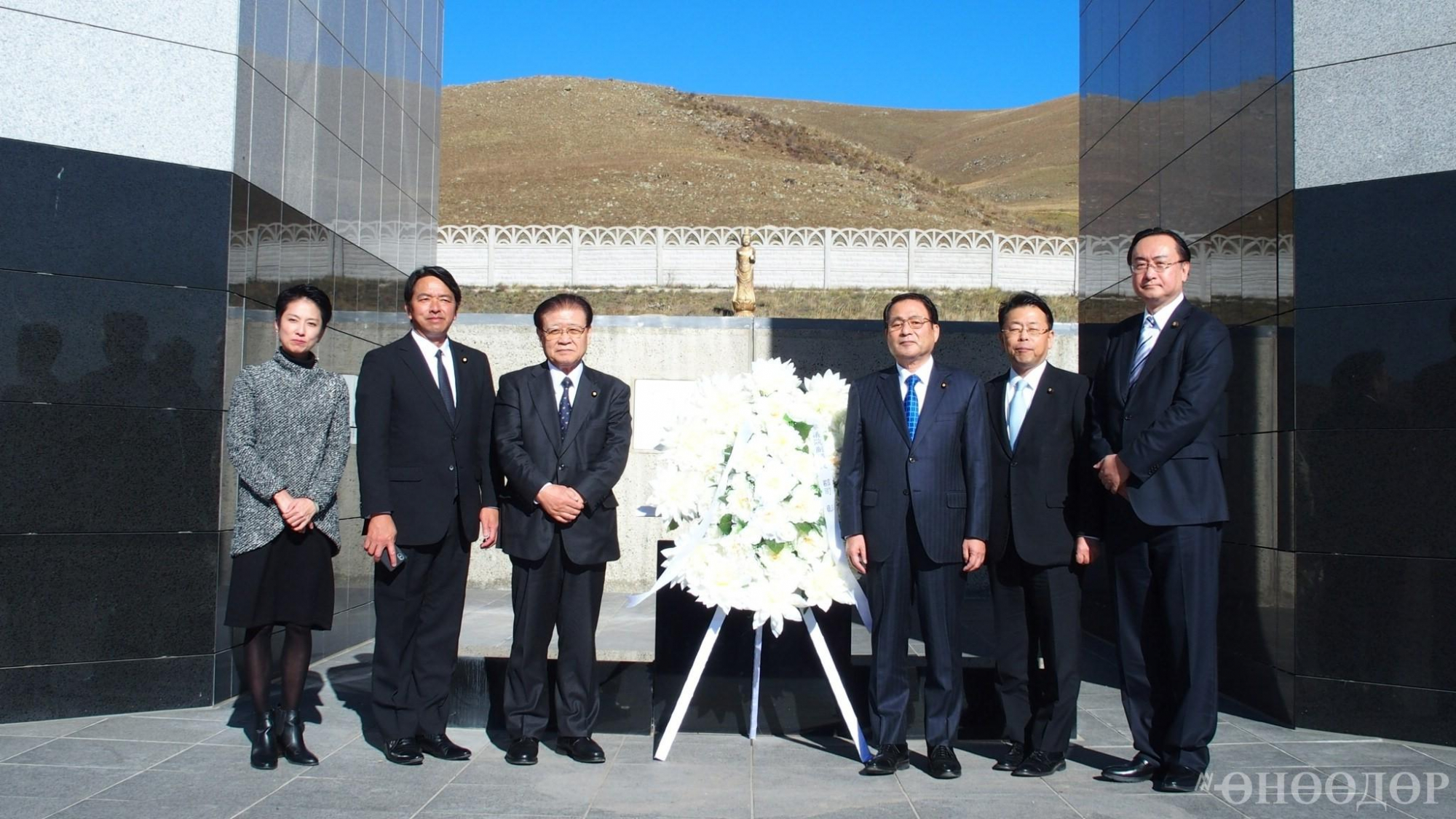 At the memorial complex dedicated to Japanese prisoners of war buried in Mongolia.

It seems that the maintenance of a large number of prisoners was a heavy burden on the economy of such a poor country as the Mongolian People's Republic, and therefore sending them back to their homeland was a relief for her. The maintenance of prisoners of war was a heavy burden not only for "small" Mongolia, but even for the USSR. There is evidence that the results of their labor did not pay off the costs of their maintenance.[10]

The prisoners were sent home in the fall of 1947. They were handed over to the Soviet side at Naushki station, and from there they were taken through the territory of the Soviet Union to the port of Nakhodka, where they were put on steamers to Japan. Given that the cold season was coming, all prisoners were given winter uniforms and provisions for 20 days. It was an act of humanism by the Mongol government.[11]

Recently, information began to appear that even after 1947 Japanese prisoners worked on the territory of our country. As if they were involved in the construction of the Naushki-Ulan Bator railway. If this really happened, then the prisoners should have worked under the supervision of Soviet soldiers, and this has nothing to do with the Mongols.[12]

Among the prisoners who were in the USSR was Lieutenant General Guo Wenling, a Mongolian by nationality. Captured in the area of the city of Hailar, he testified that there were 3 thousand Mongol cavalrymen in the 1st and 2nd cavalry divisions. In addition to him, among the prisoners were generals Barguchit Batmamatan, Ganjuurjav, Jinjuurjav, a dignitary of the Imperial Court of Manchukuo Gaplo Juan Yuan and other dignitaries of Mongolian origin. There is also an archival record that 5 generals and officers of the Buryats were captured.

Most of the captives who surrendered without resistance were ethnic Chinese, Mongols, Buryats and Barghuts. They surrendered in whole parts and formations. There were even cases when they killed or captured their Japanese commanders before surrendering to the Soviet and Mongolian soldiers.[13]

Third Neighbors and Its Enemies