Bishop Paul Meng Qinglu, a priest for 21 years, was ordained at the Cathedral of the Sacred Heart in Hohot with the approval of the Chinese authorities. 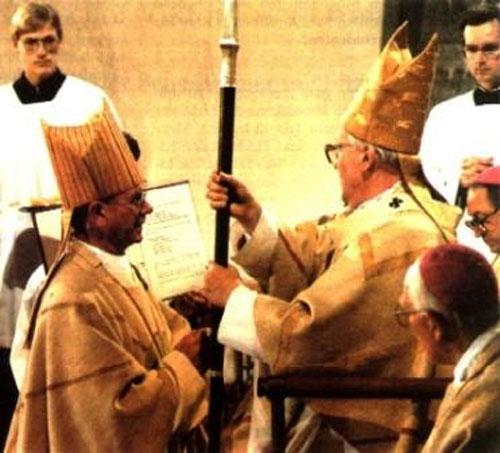 Bishop Paul Meng Qinglu, a priest for 21 years, was ordained at the Cathedral of the Sacred Heart in Hohot with the approval of the Chinese authorities.

Eighty priests concelebrated the ordination liturgy, which was led by Bishop of Shenyang Paul Pei Junmin, a classmate and friend of the new bishop. About 3,000 faithful participated in the activities surrounding the ordination, though only 600 could fit in the cathedral.

All are in communion with Pope Benedict XVI and are also recognized by the government.

Bishop Meng, a native of Inner Mongolia, was born in 1962 to a Catholic family. He entered the seminary in Hohot in 1985 and was ordained a priest in 1989. He later served as professor of moral theology and dean of studies at the same seminary.

The Diocese of Hohot is under the Archdiocese of Suiyan and located over 400 miles northwest of Beijing, where it covers 38,600 square miles of territory. The diocese has more than 50,000 faithful, 60 priests, almost 100 religious sisters in four religious institutions, and 40 seminarians.

Bishop Meng proposed the creation of a structure to organize Church affairs, the needs of parishes and matters relating to Church property.

He said the formation of the clergy was one of his priorities.

"I think my ordination will make a new dimension emerge and help priests to work together in pastoral and evangelization activity."

The bishop also said he was confident in reconciliation within the Catholic community.