It may be hard to believe for someone who spent his first winter in Mongolia this year, but it seems the cold weather is finally coming to an end. 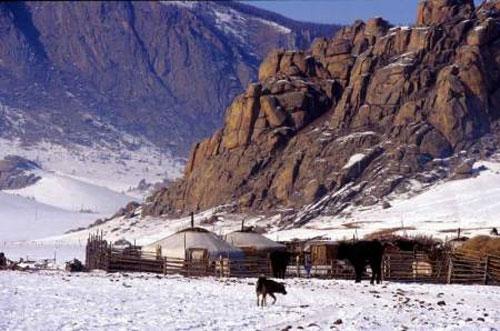 It may be hard to believe for someone who spent his first winter in Mongolia this year, but it seems the cold weather is finally coming to an end.

Spring is coming, UB is warming up, and the capital city is starting to show another side.

As temperatures have cooled up, more snow has fallen down over the capital for the last two weeks than for the past three months.

Gloves and tights are hardly a necessity anymore in the city where months old accumulated ice has mostly melted away, dripping from the roofs and eventually inside poorly constructed apartments and old rusty markets.

Ice skating rings have packed it in, leaving a pond of watery ice covering a mix of fodder and earth, and playgrounds have regained their popularity. Elders can be seen exercising in outdoor gyms or enjoying the afternoon sun on benches along with young mothers and their babies, and kids taking a ride on squeaky swings can be heard.

Teenagers nearly abandoned the staircases for the streets, socializing and smoking for hours under the small local Mongolian “pagoda” or playing outdoor basketball. Mountain bikes and motorcycle are being spotted again as some citizens have deemed the weather to be warm enough to take on the two wheel mode of transport, and some youngsters are even risking the use of rollerblades in UB bumpy streets.

Meanwhile, artificial “urinal” glaciers which had expending during the winter in dark alleys and behind kiosks, and blocks of iced snow blackened by UB’s smog - mainly cars’ exhaust gases, dust, coal from the ger districts – which laid on the side of the roads for months like bricks and pieces of concrete usually do nearby construction sites, have also gradually disappeared.

The city’s rare streets pavements have surfaced up from under the thick and slippery layers of compacted snow where they spent most of the winter, many turning into large ponds of stagnating dirtywater as streets lack proper water evacuation infrastructures; in other place, earth roads and pavements which used to be hard frozen are now a damp and muddy ground.

The melting of the snow has revealed a large quantity of papers, pieces of plastics and clothes, which have mushroomed on the sides of the roads and alleys; and a smell and taste of dust is gradually replacing that of coal as the city is getting drier and the burning of coal in hot stoves is decreasing in the ger district.

Midday temperatures are enjoyable in UB, and one can have a foretaste of how great a Mongolian summer in the countryside must be! Nevertheless, April is a treacherous month and the weather should not be taken for granted. Temperature drops are frequent and a snow storm covered the city again in a few hours only week ago , while the rest of the country, rural areas, is still under the threat of this dire winter.

As a French proverb says “En avril ne te decouvre pas d’un fil,” meaning that in April one should stay careful and keep warm, if possible.

Vegetable sellers, importers and producers, representatives from the Ministry for Food, Agriculture and Light Industry, and other officials were invited to a meeting last Friday at the Mayor’s Office to discuss current problems in the agricultural sector and explore ways of raising productivity.

Vegetable growers declared they wanted better seeds, while some of them complained of difficulties in working with governmental organizations. There were also demands for more food processing and packaging units, for a more efficient selling network, and for an easier customs inspection of imported goods. Representatives of governmental organizations talked about the need for value added farm products.

In an effort to obtain more land for cultivation, it has been decided to seize all land not being used properly and redistribute it for cultivation, while a proposal to build a storehouse in Ulaanbaatar for the autumn crop has been made.

Around 1,000 tons of potatoes and vegetables are produced in Ulaanbaatar every year.

Ivanhoe Mines sees a vast potential to expand existing resources at its flagship Oyu Tolgoi project in southern Mongolia, and founder and executive chairman of Ivanhoe Robert Friedland said the company plans to more than double the worth of its in-situ metal resources to USusd1 trillion, from about USusd400 billion at present.

The USusd5 billion Oyu Tolgoi project is expected to produce about 1 billion pounds of copper and 500,000 ounces of gold a year when it reaches full production.

Friedland declared that the company plans to announce an integrated development plan that outlines future growth prospects at Oyu Tolgoi after its annual shareholder meeting in May.

Prime Minister S. Batbold has been elected to succeed to S. Bayar as chairman of the MPRP during the party’s 11th Conference

Though the total number of voting representatives reaches 275, 194 were present during the party conference, out of which 191 voted in S. Batbold’s favour.

S. Bayar was proposed as MPRP new chairman by S. Bayar himself after this one announced his will to resign last Thursday morning.

Bayar said in his brief address that today the priority for the nation is the adoption and implementation of an efficient economic development policy for the creation of a proper business environment, adding that PM S. Batbold - who prefers to work through consensus - is the ideal man for the current situation.