HONG KONG–Mongolia plans to raise up to usd1 billion through a sovereign bond offering in the fourth quarter of this year, the country’s prime minister said. 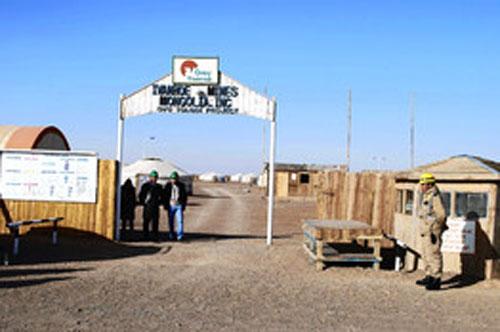 HONG KONG–Mongolia plans to raise up to usd1 billion through a sovereign bond offering in the fourth quarter of this year, the country's prime minister said.

Mongolia's resources are attracting investors. Above, the Oyu Tolgoi mine site in Khanbogd village, Umnugobi province, Mongolia in 2009.

though Mongolian officials said a listing venue hasn't yet been decided, Mr. Batbold said that "Hong Kong is a natural choice for us in terms of funding and expertise." He noted that Hong Kong was the "best gateway" to Mongolia's largest trading partner, mainland China.

The government hasn't determined which assets will be listed, a matter that requires Parliamentary approval.

Landlocked Mongolia's largely untapped mineral and energy resources are generating a great deal of interest with investors. The buzz has grown since the signing last October of a landmark usd4 billion deal with Rio Tinto and Ivanhoe Mines Ltd. to develop Oyu Tolgoi, a giant gold-and-copper deposit in the Gobi Desert.

Mongolia's proximity to China, a major customer for its iron ore, copper, coal and other commodities, adds to its appeal.

Mr. Batbold has previously laid out a plan to list three companies holding state-owned assets: one for mining assets, another for energy and a third for infrastructure.

On Monday, Dashdorj Zorigt, Mongolia's minister for mineral resources and energy, opened up the possibility for other mining listings as well, saying that the government might also list individual state-owned mineral assets and mining projects.

"We always thought it wasn't a good idea to have all our mining assets in one basket," Mr. Zorigt said.

Also Monday, Mr. Batbold confirmed his government's intention to maintain control of the rights to the Tavan Tolgoi coking-coal mining project and to subcontract its development to outside companies. The decision effectively dashes any hopes that big foreign mining companies would be the main beneficiaries from plans to extract Tavan Tolgoi's 6.5 billion metric tons of coking coal.

Mr. Batbold said his government would submit a proposal on the arrangement for Tavan Tolgoi to Parliament this month.

The prime minister said the situation for Tavan Tolgoi was different from Oyu Tolgoi, since the government itself owns the rights to Tavan Tolgoi. Mr. Zorigt said more than 10 companies had expressed interest in participating in Tavan Tolgoi.

Ivanhoe obtained the rights to Oyu Tolgoi but spent many years reaching an agreement with the Mongolian government on the terms of a deal to develop it. In the process, it brought in Rio Tinto as a partner.

Mr. Batbold said the government intends to use the proceeds of its planned sovereign bond issue to finance infrastructure and mining projects. The sale of debt would also set a benchmark for local companies seeking to raise funds abroad, he said.