In Mongolia’s South Gobi desert lies Oyu Tolgoi, touted as having the world’s largest untapped copper and gold deposits. Little wonder then that this “El Dorado” has become a boardroom battleground between the relatively unknown Ivanhoe Mines and its biggest shareholder, the giant Australian mining company, Rio Tint

In Mongolia’s South Gobi desert lies Oyu Tolgoi, touted as having the world’s largest untapped copper and gold deposits. Little wonder then that this “El Dorado” has become a boardroom battleground between the relatively unknown Ivanhoe Mines and its biggest shareholder, the giant Australian mining company, Rio Tinto.

Our attempts to get near this mine or elicit any comment from Ivanhoe were about as fruitless as the Spanish conquistadors attempts to find the legendary “El Dorado”, or “Lost City of Gold” in the 16th century. Twice Ivanhoe stopped our reporters from visiting the mine with delegations from the investment community, saying reporters were not  allowed to mingle with bankers on visits to the mine. We don’t know why that would be. We mingle with them pretty often in other contexts and usually find each other’s company amusing and mutually informative.

Perhaps that’s the point of Ivanhoe’s policy. The company and its executive chairman, Robert Friedland, do not seem to trust the media much. They maintain a robust website,   http://www.ivanhoemines.co m/s/The_Facts.asp., that pretty much takes issue with every story written about them. Friedman is legendary in the business for spinning a story and trying to control the narrative. 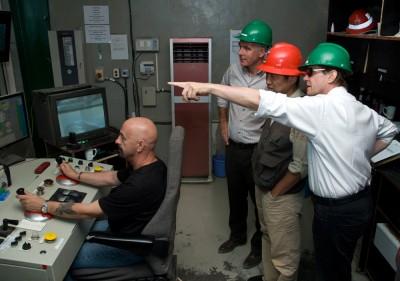 Friedland has lived a colourful and adventurous life. Perhaps he admired in his youth the swashbuckling medieval hero of Sir Walter Scott’s novel, Ivanhoe, a noble in the disguise of the “black knight” who fights alongside Robin Hood, and so named his company after him.

Friedland has had a Midas touch when it comes to monetising mining assets over the years in a business where exploration is fraught with risk. In that sense. he calls to mind the original El Dorado, or “Golden One”. This was the name given to the kings of the Muisica tribe in what is now Colombia, when they were undergoing an initiation rite for taking the throne: they covered themselves in gold dust before diving into lake Guatavita.

In time, the Muisica towns and their treasures fell to the conquistadores, who never did find the “lost city”. Friedman can only hope that his efforts to foil Rio Tinto’s efforts to take over Ivanhoe on the cheap will fare better than the Muisica’s attempts to fend off the Spanish. He may need a Robin Hood or a “white knight”, however, to come to his rescue.

(Photo: Ivanhoe Executive Chairman Robert Friedman (right) points out features of the control room at the Oyu Tolgoi gold and copper mine in Mongolia to the country’s prime minister, Sukhbaatar Batbold (centre). REUTERS/company)