Mongolia’s President Elbegdorj visited several western provinces during his tour of the country from February 27 to March 5, 2010. 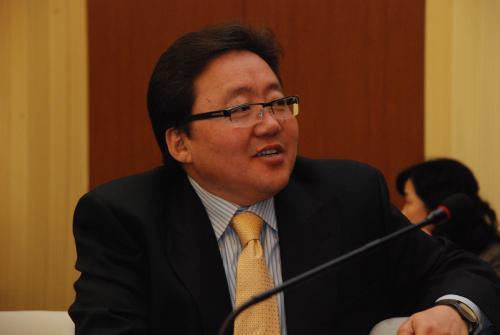 Mongolia’s President Elbegdorj visited several western provinces during his tour of the country from February 27 to March 5, 2010. Confronted with the challenges and difficulties resulting from this winter 09-10 zud, the President, upon his return to Ulaanbaatar, drew up several proposals for the Government to solve - and prevent a repeat of - the humanitarian and economic crisis citizens are currently facing in the country’s rural areas. As such, the president wishes to see the drawing up and implementation of a plan for the victims of the zud. The plan shall provide those in needs with an increased assistance in finding a source of livelihood and having access to social care services, and it shall provide jobs for the herding families who have lost all of their livestock this winter.

Due to global climate change and the increase in frequency of natural disasters such as drought and zud, Ts. Elbegdorj stated the need to draw up a strategic plan to lower risks in the animal husbandry sector by assessing hay and forage reserves in every regions, provinces, and counties.

Thus, the President would like to see the establishment of a structure that allows provinces and counties to be responsible for the creation and management of hay and fodder reserves. In order to have sufficient reserves, he proposed that state-owned and private entities producing hay, fodder, and fertilizers be supported and encouraged. This should participate in the reduction of the costly expenditures resulting from the transport of hay and fodder from far distances.

The President also wants to encourage people’s initiatives to raise domesticated animals in compliance with pasture load and management, and debates to take place among herders and local government officials to draw lessons from this year natural disaster.

The President proposes that a system of distributing fund from the state budget directly to the local government be studied, and working groups be set up in order to expand the power of local governments and increase their responsibilities. Meanwhile, this Tuesday saw the opening ceremony of the project “Providing the people of Mongolia’s remote provinces with social comprehensive services” and a training-seminar on the project took place in the Bayan-Olgii province.

The project is carried out in the remote soums of the Bayan-Olgii, Uvs, Khovd, Khovsgol and Dornod provinces’s by the Government of Mongolia and the United Nations’ specialized organizations. Its total cost is about USUSD 3 million. China has also been reported to have donated 300 tonnes of rice and flour - roughly USUSD100,000 at current market prices - to Mongolia to help fend off the effects of a bitter winter in the remote southwest parts of the country. A Chinese convoy drove the grain from Urumqi, the capital of China’s frontier Xinjiang region, to the Takixken border checkpoint on Monday.

As of March 15, a total of three million 847,364 heads of livestock have perished nationwide. The majority of them were small animals (sheep and goats) and breeding stock. The Ovorkhangai province is leading in the loss of livestock (682.500) followed by Zavkhan, Dundgobi and Arkhangai.

According to the FAO, two-thirds of Mongolia’s 21 provinces are affected by the zud. Due to the temperatures which have been described as the lowest in three decades, more than 20 thousand families have lost half their herds. The further loss of livelihood will increase migration to urban centres ger districts where winter refugees struggle to find work, warned NGOs.

#baabar news
Өмнөх Дараах
15216
уншсан
3
сэтгэгдэл
0
хуваалцсан
We hope that Honorable President will do his atmost in order to save both the livestock and the habitants in UB, addressing to internatinal organizations including UNs organizations.good luck.
The vistoms of zud is herdsmen who has lost 3400000 heads of livestock because of absence of policy of the the related ministry when the local warming already has caused 78 of area desertificated. Chaos with out logic. Another 3 000000 of livestock may be lost. Think about existing policy gaps.

Just like the herders, we must prepare ourselves for hard times

Cooperation between Lithuania and Mongolia was discussed During consultations in Ulaanbaatar