Opera travels from Mongolia to Expo, by way of Broadway

Part Broadway, part Asian steppes, the first modern opera from China’s Inner Mongolia is getting its premiere at the World Expo. 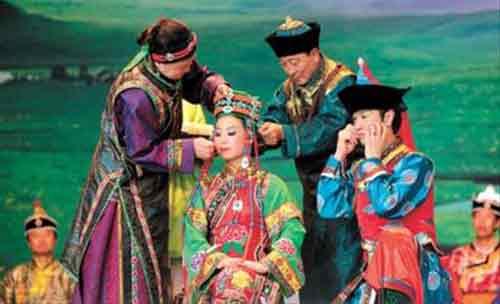 BEIJING, May 25 -- Part Broadway, part Asian steppes, the first modern opera from China's Inner Mongolia is getting its premiere at the World Expo.

"The Heart of Love," is directed chiefly by Don Frantz, associate producer of the big Broadway hits "The Lion King" and "Beauty and the Beast."

The opera combines traditional Mongolian songs and dances developed by generations of herders on grasslands with typical Broadway performances.

It received long applause yesterday at its debut during the opening ceremony of Inner Mongolia Cultural Week, the fifth Chinese provincial week at the Expo.

Frantz got the main idea for the opera when living last year in Inner Mongolia and became inspired by the grasslands and the people there.

To the musical director David Caldwell, the music from the traditional Mongolian instruments such as the horse head fiddle and the sihu, or four-stringed fiddle, were the most fantastic sound in the world.

"I involved as many Mongolian instruments into the Expo as I could," he said.

About 60 performers, most of Mongolian nationality, take part in the opera. Frantz said the performers were "incredible" singers and dancers.

The 40-minute "Heart of Love" tells the story of a young Inner Mongolian man who leaves his lover to go to Shanghai for his career. He resists all kinds of temptations of the modern city and finally goes back to the grassland to marry.

The opera will play at 10am and 3pm every day at the Baosteel Stage in the Pudong Expo site through May 28.

Caldwell said plans are afoot to prolong the run and perform the work in more places, including Broadway, after the Expo.

Is the Human Development Fund positive or negative?