In the two decades since the Soviet Union dissolved and Mongolia became an independent democracy, the country has struggled to resuscitate cultural traditions lost during its many years as a Soviet satellite. 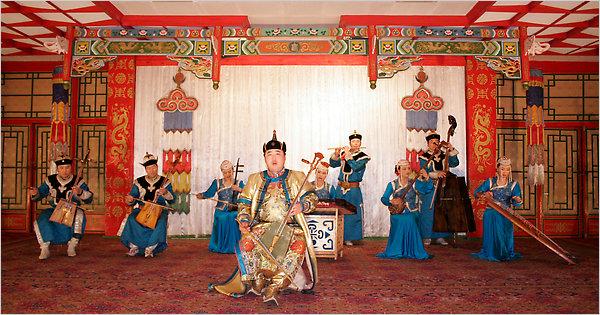 Sh.Gan-Erdene
The Tumen Ekh folk dance and music ensemble in 2006.

ULAN BATOR, Mongolia — In the two decades since the Soviet Union dissolved and Mongolia became an independent democracy, the country has struggled to resuscitate cultural traditions lost during its many years as a Soviet satellite.
“Stalin wanted to bring Russian culture to Mongolia and destroy Mongolia’s national ambition,” explained the poet G. Mend-Ooyo, speaking in the book- and calligraphy-filled office of the Mongolian Academy of Culture and Poetry, of which he is president and founder. “He couldn’t do it completely, but from 1940 to 1990 we were far from our culture. We used Russian script, we couldn’t mention the name ‘Chinggis Khaan’ [Genghis Khan], we didn’t know our own history.”
Efforts to revive the nation’s traditional culture have borne mixed results, bogged down by factional bickering, philosophical disagreements, budgetary restraints and habit. So, while Genghis Khan is once again a household name, the Soviet-imposed Cyrillic alphabet continues to replace the flowing Uighur script that the great Khan himself is said to have borrowed for his people. Surnames — which were abolished by the Soviet-backed government in the 1920s — are still rarely used, despite government mandates to revive them. (Instead, the initial of the father’s first name is often added to given names for official usage.)
There is, however, one area in which near unanimity of purpose has enabled major progress: the revival of the morin khuur, or “horse-head fiddle.” The general revival of the instrument has been bolstered by the government, which went so far as to issue a decree aimed at restoring its special role in the nation’s cultural life. In Mongolia’s music schools, the number of morin khuur students has increased significantly, as has production of the instrument.
A two-stringed bowed instrument with a scroll in the shape of a horse’s head, the morin khuur both springs from Mongolia’s nomadic heritage and embodies it.
“Mongols really like horses,” explained B. Bayaraa, a dean at the Mongolian University of Culture and Arts. “The morin khuur really reflects the feeling, the spirit of the Mongols — it was the main musical instrument.”
The origins of the morin khuur are hazy, but legends recounting its creation all center on a herder’s abiding love for a horse who dies. To numb his grief, the herder is said to have fashioned a musical instrument from the animal’s carcass, covering a wooden frame with its skin, crafting strings and a bow from its tail hair, and carving the scroll in its image. When the instrument was finished, he played upon it the sounds his beloved steed once made as it galloped over vast green steppe, whinnied on a frosty starlit night, or snorted and shook dew from its mane in the first rays of the morning sun. Soon, there was a morin khuur in every ger (or yurt) in the land.
“Every family used to have a morin khuur as a kind of altarpiece — it was a sacred part of the household,” said B. Sharav, a composer at the Mongolian State Theater of Opera and Ballet, who as a child was taught to play the instrument by his father and grandfather and as an adult has written orchestral concertos for it. “This is one thing the Mongols can be really proud of.”
The morin khuur became an integral part of nomadic culture, used to celebrate the beginning of a new year; to mark the end of a long day pounding wool into felt; to break the monotony of herding sheep; to accentuate the joy of drinking fermented mare’s milk — even to encourage a recalcitrant camel to nurse a newborn foal.
The process of making the instrument was gradually standardized. It was determined, for instance, that the thinner of the two strings (which nowadays are generally tuned a fourth apart to F and B-flat) should have about 105 hairs from the tail of a mare while the thicker string should have about 130 from that of a stallion. Goat or camel skin was sometimes substituted for horse hide and the instruments were painted green, to symbolize fertility. A repertoire evolved and the instrument, which is held on the lap as it is played, was used to accompany dance, folk songs and poetry.