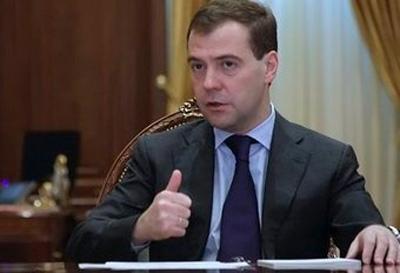 The Iron Bear—or whatever scary epithet you'd like—turned in one of their worst performances ever at the Winter Games this year. A paltry three gold medals in Vancouver, all of them ski related. (And not the fun, speedy kind.) Their once fearsome hockey program got thrashed in the quarterfinals, their figuring skating limped to one pathetic bronze and silver (they have at least one gold from every other Olympics) and their contingency plans to invade Mongolia on ice skates have basically been thwarted. This was after bragging beforehand that they would bring home at least 30 medals. Some athletes even had to return home early due to lack of funds, while high-ranking "sports officials" partied it up on the nation's dime. Those officials might want to look into Yukon real estate now.

With three years and 50 weeks remaining until the next opening ceremony, Vladimir Putin's body double—a.k.a., President Dmitry Medvedev (above)—stepped into the fray, calling for the resignation of Russia's Olympic organizers as penance for the embarrassing defeats. Well, he didn't ask so much as he implied that they might be airbrushed out of their own family photos if they didn't.

"Those who bear the responsibility for Olympic preparations should carry that responsibility. It's totally clear," he said. "I think that the individuals responsible, or several of them, who answer for these preparations, should take the courageous decision to hand in their notice. If we don't see such decisiveness, we will help them."

Gulp. Medvedev also lamented the loss of "the old Soviet school" and any time Russian leaders start pining for the good old days, you know fun times are ahead. I'm sure future Russian sports heroes will be super eager to organize the 2014 effort, after their predecessors get shipped off to their new vacation homes in Kamchatka.

This guy wasn't cheering for a Canadian wipeout ... he's just relieved he doesn't have to go through another round of bobsled "re-education."

P.S. Any "In Russia, X Y's you!" jokes and you'll be commenting on Ivan Denisovich's blog, if you catch my drift.