Alarm sounds over rise of extreme groups such as Tsagaan Khass who respect Hitler and reject foreign influence
Their right hands rise to black-clad chests and flash out in salute to their nation: "Sieg heil!" They praise Hitler"s devotion to ethnic purity.
But with their high cheekbones, dark eyes and brown skin, they are hardly the Third Reich"s Aryan ideal. A new strain of Nazism has found an unlikely home: Mongolia.
Once again, ultra-nationalists have emerged from an impoverished economy and turned upon outsiders. This time the main targets come from China, the rising power to the south. 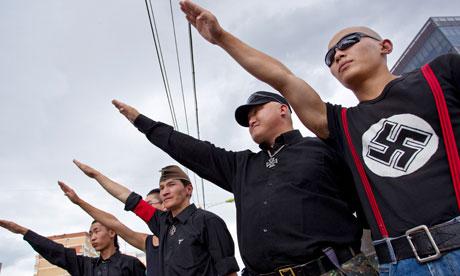 Mongolian neo-Nazi group the Tsagaan Khas ("White Swastika") salute on the streets of the capital Ulan Bator
Groups such as Tsagaan Khass, or White Swastika, portray themselves as patriots standing up for ordinary citizens in the face of foreign crime, rampant inequality, political indifference and corruption.
But critics say they scapegoat and attack the innocent. The US state department has warned travellers of increased assaults on inter-racial couples in recent years – including organised violence by ultra-nationalist groups.
Dayar Mongol threatened to shave the heads of women who sleep with Chinese men. Three years ago, the leader of Blue Mongol was convicted of murdering his daughter"s boyfriend, reportedly because the young man had studied in China.
Though Tsagaan Khass leaders say they do not support violence, they are self-proclaimed Nazis. "Adolf Hitler was someone we respect. He taught us how to preserve national identity," said the 41-year-old co-founder, who calls himself Big Brother.
"We don"t agree with his extremism and starting the second world war. We are against all those killings, but we support his ideology. We support nationalism rather than fascism."
It is, by any standards, an extraordinary choice. Under Hitler, Soviet prisoners of war who appeared Mongolian were singled out for execution. More recently, far-right groups in Europe have attacked Mongolian migrants.
Not all ultra-nationalists use this iconography; and widespread ignorance about the Holocaust and other atrocities may help to explain why some do.
Tsagaan Khass points out that the swastika is an ancient Asian symbol – which is true, but does not explain the group"s use of Nazi colours, the Nazi eagle and the Nazi salute; or the large picture of the Führer on Big Brother"s cigarette case.
Nor does it seem greatly relevant, given their unabashed admiration for Hitler"s racial beliefs.
"We have to make sure that as a nation our blood is pure. That"s about our independence," said 23-year-old Battur, pointing out that the population is under three million.
"If we start mixing with Chinese, they will slowly swallow us up. Mongolian society is not very rich. Foreigners come with a lot of money and might start taking our women."
Big Brother acknowledges he discovered such ideas through the nationalist groups that emerged in Russia after the Soviet Union"s fall; Mongolia had been a satellite state. But the anti-Chinese tinge is distinct and increasingly popular.
"While most people feel far-right discourse is too extreme, there seems to be a consensus that China is imperialistic, "evil" and intent on taking Mongolia," said Franck Billé of Cambridge University, who is researching representations of Chinese people in Mongolia.
Hip hop tracks such as Don"t Go Too Far, You Chinks by 4 Züg – chorus: "shoot them all, all, all" – have been widely played in bars and clubs. Urban myths abound; some believe Beijing has a secret policy of encouraging men to have sex with Mongolian women.
Yet Tsagaan Khass claims it welcomes law-abiding visitors of all races, and Big Brother can certainly be hospitable.
Enthusiastically shaking hands, he says: "Even though you are a British citizen, you are still Asian, and that makes you very cool."
He says the younger members have taught him to be less extreme and the group appears to be reshaping itself – expelling "criminal elements" and insisting on a good education as a prerequisite for membership. One of the leaders is an interior designer.
But critics fear ultra-nationalists are simply becoming more sophisticated and, quietly, more powerful. Tsagaan Khass say it "works closely" with other organisations and is now discussing a merger.
"Some people are in complete denial … [but] we can no longer deny this is a problem," said Anaraa Nyamdorj, of Mongolia"s Lesbian, Gay, Bisexual and Transgender Centre.
The US state department has noted increased reports of xenophobic attacks since the spring. The UN country review cites a recent vicious assault on three young transgender women. When one of the victims publicly blamed an ultra-nationalist group – not Tsagaan Khass – death threats quickly followed.
"They are getting more support from the public," added Enkhjargal Davaasuren, director of the National Centre Against Violence, who fears that ultra-nationalists are growing more confident and victims too scared to come forward. She pointed to a YouTube video posted last year, showing a man roughly shaving a woman"s long hair. The victim"s face is buried in her hands, but her hunched body reeks of fear.
Others in Ulan Bator suggest the movement is waning and suspect the groups" menacing stance and claims of 3,000 members are bluster. Billé thinks there is "a lot of posturing".
"We have heard of instances [of violence]. They are not necessarily all right or all wrong," said Javkhlan, a Tsagaan Khass leader. But the group is simply a "law enforcement" body, he maintained: "We do checks; we go to hotels and restaurants to make sure Mongolian girls don"t do prostitution and foreigners don"t break the laws.
"We don"t go through and beat the shit out of everyone. We check our information and make sure it"s true."
They rely on police and media pressure to reform such businesses, he added. And if that failed? "We try to avoid using power," he said. "That would be our very last resort."
#baabar news
Өмнөх Дараах
25130
уншсан
2
сэтгэгдэл
0
хуваалцсан
МОНГОЛ ГАЗАР ШОРООГОО ХАЙРЛАЖ БИЕ БИЕНЭЭ ХҮНДЭТГЭЖ ЯВДАГ АРД ТҮМЭН БИЛЭЭ,
TSAGAAN HAS MANDATUGAI

Packing for a Gobi Dinosaur Hunt